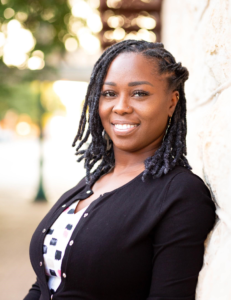 Fatimah Gifford (she/her) is a committed advocate who brings extensive experience in reproductive health and justice and organizational leadership to her role as Executive Director of Provide.

Fatimah Gifford holds a Bachelor’s degree in Business of Science and Business Administration with a concentration in Marketing from Hawaii Pacific University in Honolulu, HI as well as a certificate in Managing Organizational Change from the University of Texas at Austin. She began her career in marketing, public relations, and communications nearly 19 years ago with executing community events for Hawaii Pacific University and soon began her work with developing, implementing, and managing marketing and public relations campaigns for the Army National Guard as well as the Department of Public Safety.

She began working in reproductive health and rights work with Whole Woman’s Health as the VP of Marketing and Communications in March 2013, and quickly committing herself to advocating for as well as educating people on their reproductive decisions.

Fatimah has always believed that when you give people a voice they become empowered and it will help them make the decisions that are the best for them and their families. During the beginning of the onslaught of political targets from the Texas legislature, she realized that there was a clear disconnect and missing voices that were incessantly overlooked and quite often discounted: the voices of the community- specifically Black women. And with that, began her crusade to ensure that those from marginalized communities who were greatly impacted by those restrictions, had a stage to speak up and out about how restrictions impact their everyday lives.

Since that first day in March, and for every day since, Fatimah has been front and center in the culture wars and stigma eradication in Texas and beyond. She has fielded hundreds of national and local media calls to include: NPR, MSNBC, Associated Press, Ebony, HBO, Showtime, TBS, and the New York Times. She has also become a fixture in community activism and often speaks on panels in addition to community events engaging her audiences on the importance of understanding what their reproductive rights are.  She also played an integral part in developing and coordinating national communications strategy with the June 2016 Supreme Court landmark win, Whole Woman’s Health v. Hellerstedt, which overturned House Bill 2 that restored safe abortion access to Texas communities.  And for her efforts and tireless work, she was named the Person of the Year by the Lilith Fund for Reproductive Equity.

Fatimah also briefly joined URGE: Unite for Reproductive & Gender Equity as the Communications Director. At URGE, a national reproductive justice organization that centers its work on young people, specifically Black women, people of color and LGBTQ folks, Fatimah recreated their Communications department to lift up voices of marginalized people within the South and Midwest.

Additionally, she is a Board member at Ibis Reproductive Health, a global non-profit organization that drives change through research and principled partnerships that advance sexual and reproductive autonomy, choices and health.

When she’s not pouring herself into her work, she loves to travel with her husband of 21 years and often dedicates her spare time and countless hours of cheering and supporting her two sons who are avid athletes in high school and at Baylor University in Texas.

Do you serve clients or patients of reproductive age?
Does your organization offer information, resources, and/or referrals for health and social services?
Are you interested in professional development for your staff or colleagues?
Are you interested in capacity building support to assist your organization in addressing unintended pregnancy and referrals for abortion care?
Does your organization provide care in any of the following areas - HIV, Domestic Violence/Sexual Assault, Primary Care, Family Planning, or Substance Abuse?
Contact Quiz
{{title}}
{{image}}
{{content}}